The History of the Great Ocean Road ​The twists and turns of the 243km Great Ocean Road are one of Victoria’s greatest tourist attractions. The road follows the ocean; one minute you are at a scenic lookout 300 metres above sea level with the Bass Strait seascape stretching out ahead of you for as far as the eye can see, the next you are looking directly at the beach from the window of your vehicle.

This stunning road is a favourite for motorbike riders, cyclists, motorhomes, campers and Sunday drives. Surfers, swimmers, golfers, bush walkers, groups of teenagers and young adults, old friends, school camps and nature loving couples, all frequent this stunning part of the world. Lined with bushland on one side and ocean on the other, there are hundreds of opportunities for exploration and discovery. Visitors can enjoy waterfalls, go bird watching, surf at the famous Bell’s Beach, immerse themselves in art galleries deep in the forest, follow hiking tracks, and zoom along mountain bike trails.

Before the Great Ocean Road was built, the coastal communities that now sit dotted along it were extremely isolated. The inhabitants had to endure long and difficult journeys through dense bushland any time they wanted to visit their neighbouring towns. The creation of the new road made coming and going from coastal communities much easier.

Who built the Great Ocean Road?

In the late 1910s plans were underway to build the road. The Mayor of Geelong, Alderman Howard Hitchcock, started this project by fundraising and creating public awareness of the project. Construction began in 1918 and continued for over a decade. There were many reasons for the creation of the road. Initially it was to provide access to the coastal communities but once the First World War was over, there were thousands of men who needed employment. Building a monument to fallen soldiers was a very practical and therapeutic activity for them to engage in.

All together, 3000 men were employed to work on the road. 2300 of them were returned servicemen. The other 700 were participating in a work for the dole scheme. The work was intense; the men laboured for eight hours a day using only picks, shovels, hand explosives, wheelbarrows and horse-drawn carts to chisel away at the hard limestone and sandstone cliffs. In those days, there was no heavy machinery to make the job easier.

When was the Great Ocean Road opened?

On March 18, 1922, the section of the Great Ocean Road between Lorne and Eastern View was officially opened. Eighty cars full of tourists, were the first of many to travel to Lorne where the official celebrations were held. These days, the Great Ocean Road is an iconic local and international destination which attracts over 2.8 million visitors every year.

In the 1930s when the construction of the road was nearing completion, the Memorial Arch was built to honour the World War 1 soldiers and servicemen who had participated in the building of the road.It was also as a tribute to their mates who had died, fighting for Australia on the other side of the world.

On November 26, 1932, the entire road project was finished and the road was open. The Great Ocean Road is the world’s longest war memorial and has been named as a place of ‘extraordinary historic and cultural significance’ by the Australian Heritage Council.

Where does the Great Ocean Road start and finish?

The Great Ocean Road starts in Torquay, 104 kilometres (90 minutes drive) from Melbourne. It finishes in Allansford, near Warrnambool. There are inland roads that have been constructed in the last century that get commuters to and from the coast, but the Great Ocean Road is by far the most picturesque and definitely the most fun.

Have you ever visited the Great Ocean Road?

Have you taken a helicopter tour of the region or climbed up to attempt the treetops walk at the Otway Fly? Or is golf at Anglesea more your style? Have you been to see the whales at Warrnambool or the Twelve Apostles?

Tell us about your favourite adventures on one of the world’s most spectacular drives and check out all of our Great Ocean Road tours. 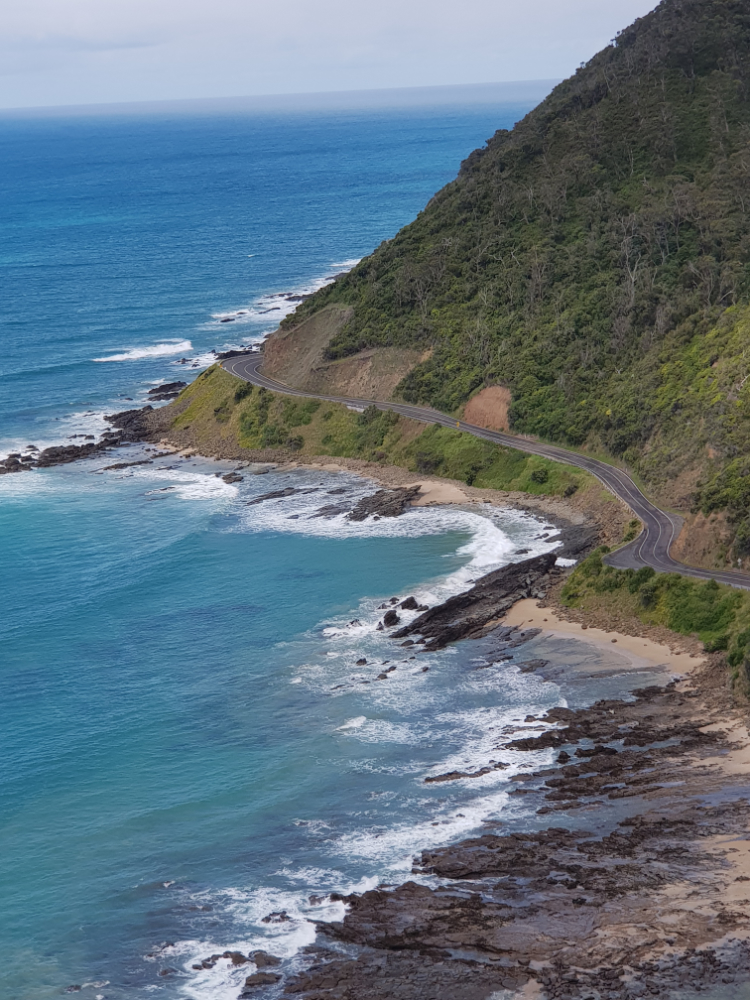